Who Was series books, biographies
14 titles in the award-wining, top-selling kids' biography series, drawing on my knowledge of sports as well as my research abilities. These books tell the great stories of people (and one animal) that made a big impact on our world today.
Things That Go and Dolphin Dive
A pair of leveled books in the new Scholastic Readers series.
Who Was Ernest Shackleton?
One of the greatest adventures of all time comes to life in this biography of the great English/Irish explorer, Ernest Shackleton.
Who Was Milton Hershey?
A biography of the man who brought chocolate to America! Part of a popular series.

Here’s a look at the first section of the chapter on Randy Johnson’s 2004 perfect game. Enjoy!

That’s how old Randy Johnson was on May 18, 2004, when he wrapped up the 17th perfect game in baseball history, and the first pitched by someone with four decades of life under his belt. Striking out 13, the second most ever in a perfect game, Johnson shut down the Atlanta Braves 2–0 and cemented his already solid place as one of the top lefthanded pitchers the game has ever seen.

Want more numbers? Johnson has them in spades. Also in 2004, he became only the third pitcher with more than 4,000 strikeouts, the most ever by a lefty. No pitcher ever, perfect game or not, has reached above The Big Unit’s 6 feet, 10 inches. His five Cy Young Awards, including four straight from 1999–2002, are the most behind Roger Clemens. He has more 300-strikeout seasons than any pitcher in history. He had three wins in the 2001 World Series, which helped him earn co-MVP honors with Curt Schilling.

And then came a sultry night in Georgia, after which, said Arizona manager Bob Brenly, “Everything he’s done up to this point pales in comparison.”
Added Arizona general manager Joe Garagiola Jr., “Now there’s nothing missing on Randy Johnson’s resume. Every box is now checked.”

Some baseball experts thought Johnson had instead checked out after the 2003 season, when he pitched in only a handful of games due to two stints on the DL. The criticism continued as he started 2004 with a un-RJ-like 4–4 record into that May start against the Braves. Of course, a “bad” beginning to a season for Johnson would be a career year for most pitchers. Though he had lost those four games heading into his perfecto, he led the league in Ks/inning with more than 11 and opponents were hitting a paltry .156 against him, the lowest mark in the both leagues.

The Diamondbacks’ first contract with Johnson, four years at $52.4 million, had paid off enormously for them, as he led them to their first championship in 2001. His second contract, a two-year $33 million job signed before 2003 was looking like a less-solid investment. But Johnson proved on that May night, and throughout 2004, that anyone who counted him out had counted too quickly.

It was a hot and steamy Atlanta night when Johnson took the mound against the Braves. “With the humidity, you get loose pretty quick,” Johnson said.
Not so the Braves, apparently. Only two nights earlier, the once-mighty Braves had watched Milwaukee’s Ben Sheets whiff them 18 times, which made their futility against Johnson doubly frustrating. (ESPN.com’s Jayson Stark passed along this tidbit from Ken Hirdt of Elias: This was the first time that a team had been struck out that many times and no-hit in consecutive games... ever.)

The first batter, Jesse Garcia, tried to push a bunt toward first for a hit, but Arizona first baseman Shea Hillenbrand charged the ball and lunged to tag a headfirst-sliding Garcia for the first out. Sitting behind home plate, Joe Gariagiola Jr. recalled that play later in the game, noting that, “Maybe the toughest play of the night was the first one of the game. Who knew then what would happen?”

Johnson then struck out six of the next nine batters.

“I felt my velocity got better as the game progressed,” Johnson said. “My slider was the best it’s ever been velocity wise. I threw a few split fingers, not many.”

Perhaps the most crucial at-bat of the game came in the second, when Braves catcher Johnny Estrada, the only Atlanta player to see ball three all night (only seven others even got to ball two!), fouled off three straight 3-2 pitches before fanning. Estrada was the only Braves batter near the ball all night; he actually saw 22 pitches in three at-bats, nearly 20 percent of Johnson’s total of 117 pitches. Finally, Estrada swung and missed and the march to perfection continued.

To read more, pick up a paperback copy of Perfect: The Story of Baseball’s 17 Perfect Games (Triumph, 2005). 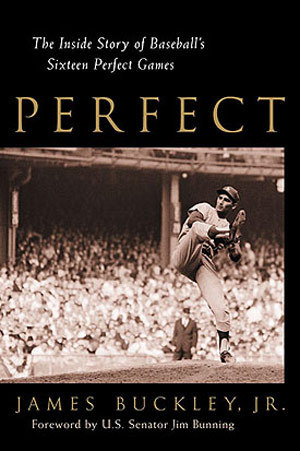